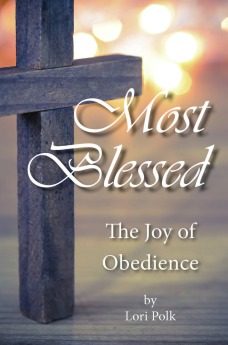 "Most Blessed" is about my spiritual journey and how I finally got myself a personal relationship with Jesus Christ.

I hope when you read it you will know that you too can have peace that surpasses all human understanding; and that God loves you very much and He always will. No matter what.  Read More

I was a guest on the "Love, Hope and Faith with Heather Murdock" television show. God knows that my biggest fear in life is public speaking. So, of course, my first interview about the book was a live television show. For an HOUR! I was so scared during the interview that my mouth went completely dry. I kept drinking water, which I'm pretty sure you're not supposed to do on live TV, but it didn't help. I had no spit and my insides were a wreck. Every break I was reminding God that He had put me in this situation and I needed Him to get me thru it. I knew God had put me here because public speaking was the first item on my NEVER list.

But then it happened. During the 3 minute break before the last 12 minute segment I was no longer afraid. I finished the show in total peace and pure enjoyment, and was actually sorry when it was over. I even had spit! God had taken my biggest fear in life and turned it into total joy. How does He do that?

But that wasn't all God had done. He showed me that with Him there is nothing I cannot do. A few years later I joined a Bible study group at my church. One night we needed someone to read the Bible verses we would be studying that night. I volunteered. What!? Me!!?? Yep, it was my voice saying, "I'll do it." Had I not done the live TV interview I know I NEVER would have raised my hand to read. But, it didn't end there either.

A couple years later, someone in Bible study asked me to read something for her at her brother's funeral service. I was honored and immediately said yes. When my old fear of public speaking started creeping in I remembered how God had been preparing me for this. I practiced a lot and it was one of the easiest things I have ever done. Go fig. I know that I know that I know God will get me thru everything He calls me to do.

I honestly thought that was it for public speaking. God thought otherwise. When one of my very best friends' mother passed away, she asked me to speak for the family at the funeral. Of course I was honored. And scared. But I started to see a pattern here. Each time I spoke was in preparation for the next time. And I thought it was all to lead up to this moment.

I have been asked to speak at the women's ministry meeting at my church. For a half hour!! What!? Me!!?? Why God?

I now know the answer. God loves me so much He wanted to bless me with precious, cherished memories and experiences. And I'm so glad He did.

Lori has inspired me and impacted my life with "Most Blessed" being published. "Most Blessed" is written in Lori's words, when I read it (over and over) it is like she is sitting next to me. She writes in a style we can all understand and relate to. She is a "Lil one" with the "Biggest Heart" and a Great Love of God. ~ Darlene Harbeck

I always love to hear from my readers. Please don't hesitate to contact me